It’s mid-December, so it’s probably time for you to get on a plane with the kids. You would rather wait in line at the DMV for six hours with no coffee.

Here are the apps that saved us on a 4-flight journey (round trip) to see our family in Florida. The Momsicle Facebook community helped me improve my selection of iPhone apps for the kids (ages 3 and 1). Please leave a comment to let us know what your own favorites are!

K-Pants–the three year old–could choose to drag a car through the mud and then wash it; collect trash and recycling; load and move dirt with construction equipment; direct traffic with a traffic light; or fix flat tires at the mechanic.

Finger tapping is incredibly simple in all options except the trash and recycling game (but still not too hard there). Since we couldn’t pack our Tonka trucks in our carry-on luggage, Trucks by Duck Duck Moose was the next best thing.

This game feels like being on the Island of Sodor. If your child is a Thomas fan, we highly recommend it.

Kids can drive the train around, blow the whistle, pick up passengers, and carry and drop-off freight. It helps to have an adult practice with the preschooler for at least the first time or two, because they might miss stations or have trouble with the speed lever. But once or twice was all it took for K-Pants to be independent.

Monster at the End of This Book by Sesame Street 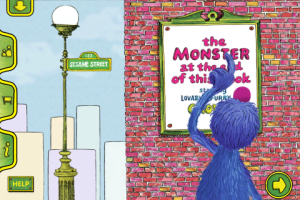 It’s a classic and Sesame did a great job bringing the book to life in this app. K-Pants thought Grover was so funny.

K-Pants’s favorite parts were the interactive pages: snapping the ropes and breaking down the brick wall (above). It helps to show your preschooler how to switch to a favorite page. The down side to this app is that it can take a while to load from page to page, and preschoolers don’t have much patience.

Kids choose a monster and then decide what to feed it from the fridge. They can choose how to cook the food (chop, steam, sauté, blend).

K-Pants really loves to blend things because the blender makes the phone vibrate. He ground up a lot of sausage and raw meat. Luckily his monster preferred them that way…

A HUGE thank you to the Momsicle Facebook community for suggesting so many apps. We were saved because of it! We downloaded lots more that we really liked. These were the standouts.

Note: All of these games are more like toys: you can play with them in various ways. Which is great for preschoolers (it can be stressful to try to “win” a game, especially when it’s hard enough to master the controls of each game). Also, I was not in any way sponsored by any of the developers of these games.

Moving with Kids Sucks, So Let’s Punch It Out

Our family moved from New York City last year. It kind of felt like we packed up in the middle of the night, put on five layers of clothing, and left under cover of darkness.

My husband got a job offer in Oregon that started right away so we headed out in the middle of a blizzard on one-way tickets to Portland. We decamped at my mom’s house and searched for a place to live. Which we found. And it was adorable. But it was rented and the owners moved back in at the end of our lease, so we needed a new adorable place to live.

Like many of you out there, we salivate at the amazing house deals out there, and we think to ourselves, Wouldn’t it be great to buy?

But then, like a lot of you out there, we already bought, at the wrong time, and have watched–or are watching–thousands of dollars fly away in the wind as we pull our rain jackets closer around our faces and close our eyes.

And if it’s not your house, it’s your job, or your investments, or your plans for adventure or independence. Kind of sucks sometimes, doesn’t it?

So indulge me as I take a minute to get out a punching bag.

On the punching bag, I’ve written ECONOMY in red permanent marker (the bag is made of white leather, so the red will show up, don’t worry). And now we’re putting on giant boxing gloves and on the count of three we can all give it our best shot. Or twenty shots. Or however many shots we need until we’re heaving, sweaty, emotionally drained balls on the floor. And then we can take off the gloves and get out brass knuckles or knives. Kitchen knives are fine. I don’t expect you to all have switchblades.

Let me finish sweeping up the insides of the punching bag and applying Vaseline to my hands.

You know, I’m a pretty positive person. In fact, I like to think of myself as a consistently glass-half-full kind of gal. But I’ve had a few mad goat moments lately. (You know the goat from Sesame Street? I think we’re related.)

So I just wanted to have a mad goat moment with you, and say it’s okay to lose your marbles sometimes. We just can’t keep it together all the time.

Next up, after the dust settles, an awards-show-style round of thanks, complete with violins.

Posted in Something to think about

The American Academy of Pediatrics is like the Catholic Church for over-educated mothers: guilt, guilt, and more guilt.

Because that’s what we need more of.

Thanks be to God that I’m not worried about having enough food for my kids, where quality childcare is coming from, or which utilities to pay. But with a master’s degree and a gig as a full-time mom, I am part of the five percent who pay close attention to what the American Academy of Pediatrics says.

On Tuesday the AAP released its updated guidelines for children’s screen time.

The bottom line: children under two should have no screen time (that includes parents having a television on in the background); also, no programming has educational value for the under-two set.

Really? Because K-Pants learned sign language from Signing Time at twelve months. He loved it. At first I thought the magic DVD just bought me time to do the dishes. A month or two later we were having a playdate with another mom who did sign language classes with her daughter.

K-Pant’s play date did not sign, even for her highly interactive (and expensive) classes with Mom.

Suddenly The Pants was an idiot-savant with sign language, knowing more than pretty much any baby we met (until I stopped getting the new DVDs).

I was hoping that the AAP’s recommendations for television-watching under two were fading into the background, or would at least be updated with some common sense. But now they’ve gone and released Vatican II.

The new recommendations are apparently based on 6 billion studies saying that you suck if you let your kids view anything or have TV on in the background. That means no college football on the weekend, Dad. And forget the World Series during dinner.

(Yes, I said it. We watch baseball during dinner. You know what else? We don’t always eat together. That’s right! Judge away.)

Now let me be fair. There are problems with kids watching television. Big problems–namely what and how much. More than ten hours a day of violent, action-packed television is bad. Very bad.

But I’m tired of logic that assumes that kids who have televisions in their rooms or watch hundreds of hours of TV are the same as all kids. I used to be a classroom teacher in urban schools. We described what was fair as giving kids what they need, not giving everybody the same thing.

If Mr. Pants watches an hour of Thomas the Train after a day of going to the zoo, playing with his trucks in the dirt, interacting with other kids at play group, then riding his toddler bike outside while we search for the moon, that is different from him watching Nickelodeon in his room all day long.

(The AAP does recognize that parents have to get stuff done, but they suggest having your child play with nesting cups nearby while you prepare dinner. You don’t think I’ve tried that?)

So I’m wondering where the studies are that examine the effects of screen time on children who watch only educational programming for one-to-two hours per day.

Are these kids turning into Tasmanian Devils by the time they’re two? (Wait, they become toddlers! Scratch that.) Are they being diagnosed with ADHD at higher rates? Are they being thrown out of their hemp-based Montessori schools for imitating Super Grover 2.0 and dive-bombing the other kids one too many times?

And let’s talk about parental sanity.

With two kids two-and-under in my house, my sanity is paramount. Between taking K-Pants on experiential learning trips, cooking my family organic and unprocessed meals, and nursing Baby Woww until he’s one, I need a frickin’ break.

Can you let me shower and put some make-up on? Can I have twenty minutes to check email or call a friend (lifelines to the outside world where other adults live)?

These things make it so that I can better avoid severe depression, screaming from utter frustration, and shaking the baby–all things the AAP would agree are not healthy.

So don’t give me lists of what my child could be doing instead of watching TV. I know what he could be doing. And I’m still having him watch Sesame Street.

Moms, if you plan on having no television on in your house ever, that’s awesome. And it rocks that you can follow the recommendations to a T. But if you are a mom who has pretty cool kids and needs an hour of educational television to help her out because the nesting cups just aren’t cutting it, or if you are feeling in-over-your-head and can’t make it through until bedtime, then I release you from the Catholic Church of mom guilt.