14 Tips for Flying with Young Kids

The quickest advice: Don’t do it. Now go have a glass of wine.

Everyone hates to see a family with young kids get on the plane. And you know who hates it most of all? The parents. I would rather be getting an enema, washing my hair with hot tree sap, or eating a can of spray cheese topped with Lucky Charms and mayonnaise. If you know me, that’s about as low as it can get.

But we just got back from Tampa and we survived four flights with a three year old and a one year old. Everyone is remarkably intact. K-Pants threw up on the first flight during the bumpy descent, so that was awesome; but because I was prepared with a full extra change of clothes for him and Baby Woww (whom he also sprayed), things were alright.

How to Survive Flying with Young Children

I packed liquid melatonin, children’s Dramamine, adult Dramamine (don’t forget to take care of mama!), Ibuprofen, and nighttime Orajel (Baby Woww was teething). We’ve used Benadryl in the past, but I forgot to buy it in a small enough container to pass through security. I am NOT a doctor, so don’t consider this medical advice. But I will say that I experimented with each thing before taking it on the plane, to make sure nothing had the opposite effect on the kids. And I follow dosage instructions. If you’re going to give the kids something, make sure you do it 20-30 minutes before you want it to take effect.

2. Pack in advance. I’m admittedly neurotic, but I feel like packing one week before the trip is crucial. That way you can assess what you need to go to the store to get. I knew to go find the Orajel that was missing from the liquids/drugs bag, and I had time to search out extra headphones and phone chargers. It’s the worst feeling to realize at midnight the night before the trip that you need something critical. Plus, the night before your trip, you NEED to sleep.

3. Use technology to your advantage. We have an iPhone and a tablet that–thanks to you, readers!–were filled with kid-friendly games. We bought the Fisher Price iPhone Apptivity case, and it worked great for the kids to hold, and–bonus!–it made it easier for me to find my phone in the seat pocket or travel bags (it’s hard to lose a phone when it’s being hugged by a colorful baby rattle). If you have a toddler who doesn’t constantly press the home button on your phone, then don’t worry about a special case. The one year old always pushes the home button, and the case has a feature that makes it so the child can’t do it.

4. If you can separate the kids, do it. This was unexpected. I feel like when we travel together I can only survive if my husband is next to me as another enforcer and source of moral support. However, the biggest problems we had were generally due to the baby wanting something the preschooler had, or vice versa. So they mainly fought over things, and there’s no good place for time-out on a plane (although for something egregious, the back area near the restrooms will work). On our return trip my husband got upgraded to first class with the baby, and it was much less stressful for each of us. And I have to give my husband credit here, he let me choose where I wanted to sit and I chose coach with the three year old, because flying with kids aged 9-months to just under three years is the WORST. 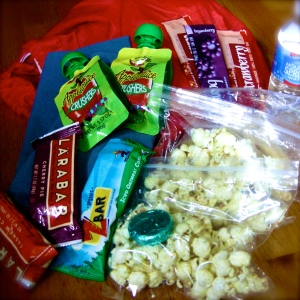 This is a no-brainer. Try to make them a real mix of savory and sugary, so that you don’t have sugar highs and sugar lows. Things wrapped in shiny wrappers always work well for us, so we had Luna bars and fiber fruit bars. K-Pants is obsessed with cough drops, so we brought a bunch of those. We also got popcorn and apple crunchy straws from Trader Joe’s. TJ’s is perfect for these kinds of snacks. I recommend trying out any new snacks on the kids before the flight so that you know what they’ll really go crazy for. 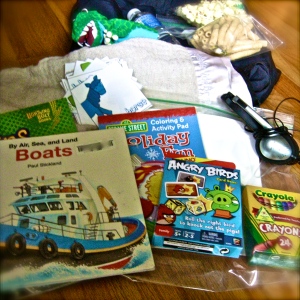 This is mainly for the preschool set. Though my friend Emily had finger puppets for her one year old, and felt cut-outs entertained both kids when I stuck them on the seat backs. 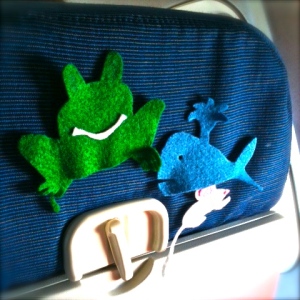 7. Bring books, especially audio books. We stopped at the library before the trip and got some paperback books about K-Pants’s favorite things (trucks, boats, trains). It was nice that the books were new. We also looked for audio books that I then downloaded onto an iPod, so that the toddler could listen during the flight. NOTE: we haven’t had any success with either of our babies wearing headphones. But now that K-Pants is three, he wears them fine. We practiced with the headphones the week before.

8. Label things. One of the hardest things when traveling is that everything is packed so neatly in bags that I don’t often use, so it takes me way longer than necessary to locate the medicine or the headphones. Meanwhile, someone is having a meltdown. I went overboard and labeled the zippers on my backpack with “Liquids” and “Technology” and it was awesome.

You can never have enough. You’ll need a couple for trash as the kids eat snacks. You’ll need some for soiled clothes or diapers. I also packed all snacks and toys in bags that we could then reuse later. Just throw ’em in and I guarantee you’ll use ’em.

10. Bring your big stroller. We could have gotten by easily with a single stroller in Tampa, but the double allowed us to strap two tired kids in at the airport, or have one child in the stroller with a suitcase in the other side. Options are endless, and you can gate check that bad boy for free.

11. Don’t be afraid to buy media and food on board the flight. I was frazzled and exhausted on our second flight to Tampa. I’d been thrown up on the flight before, and my airport burrito had canned corn in it. I was in a MOOD. Eight dollars for a little tapas box on the plane was definitely overpriced, but it was just the gourmet pick-me-up I needed. And paying for DirectTV came in handy for kids movies, and sports and adult entertainment (not that kind!) when the kids were napping. Just put out of your mind how overpriced everything is: Your in-flight sanity is priceless.

12. Park at a long-term lot that drives you directly from your car to your terminal. You know flying is going to be nerve-wracking, so why start it out with a frustrating trip from the outer banks of economy parking, where you have to wheel all your gear to a bus stop and wait. We used Air Park at the Portland airport, and they come to your car and drop you off at the terminal for a little less than $10 per day. Worth it if you have to leave your car.

13. Practice before getting on the flight.

The kids don’t usually play games on the iPhone or tablet, and I didn’t want the plane to be the first time, because there’s always a little frustration in learning something new. So we talked about how exciting the flight would be, and practiced with the games and the headphones beforehand. We also practiced with wearing the carry-on backpack.

14. Pack a full set of extra clothes for each child. Comes in handy in soooo many ways: accidents, throw-up, spilling ginger ale…

Please add your tips so that others (including me!) can benefit.

Want more family travel advice and ideas? The Travel With Kids page has links to useful travel posts by other parent bloggers.