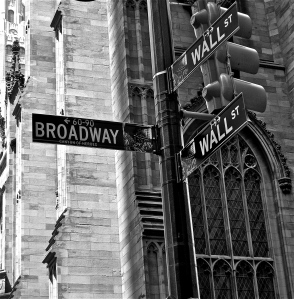 I go to church three blocks from Ground Zero, and I’ve worshipped there—at Trinity Wall Street, one of the oldest churches in Manhattan—since I moved to New York. I’m a bell-ringer (Quasimodo-style), and I met my husband through the church and we had our wedding blessing there.

I wasn’t in New York on September 11, but Trinity was. The parish served as a rescue and prayer center. There’s an ongoing memorial to the victims of 9/11 at St. Paul’s Chapel, our second parish site.

Lately, I’ve been listening to the anti-Muslim vitriol and Rev. Terry’s plans for the called-off Koran burning. A lot of Christians equate God with fear and vengeance (hey, there’s plenty of both in the Bible!), and are happy to add more bricks to their walls of self-protection. They feel the Muslim community center is insensitive to victims’ families, and that Muslims must be up to no good.

Is there any merit to this?

Well, Mayor Bloomberg is on the board of the 9/11 Memorial, where he interacts with families, and insists that none of the families he’s met are opposed.

Fine. But surely the Muslims are up to no good.

I reached out to the Vicar of my church. She knows and respects Imam Feisal Abdul Rauf, and she spoke in favor of the center at a city planning meeting.

Hmmm. But how do I know for myself?

I decided to check in on some Muslims to see what kind of mischief they were up to. K-Pants and I ran into Ama and Nina at the park. My friend Sonja is Nina’s mom, and they go to mosque every week.

Where was Sonja? Why not at the park with Nina? Apparently, Sonja was at home baking cakes for Eid, which marks the end of Ramadan. I would have taken this as a cover-up, except I’ve eaten Sonja’s cakes, and they are marvelous. Once she left half a cheesecake at our house (I ate it all, and I am still Christian, so these are probably not subversive cakes [but they’re not good for your daily saturated fat intake]).

Then K-Pants and I approached our building. Aha! A Muslim trying to get in. This was Salman. He couldn’t open the door to the building because he had too many groceries in his hands.

Why all the provisions, Salman? Preparing for a catastrophe? Apparently, Salman was also getting ready for Eid. His father has a heart condition and has been in and out of the hospital. His mother was home care-taking and couldn’t go to the grocery store. Eid will be crazy, he says, but I should stop by next Monday or Tuesday because his mother would like to have me over. Hmmm… what for? Trying to convert me? No, they just want to say thanks for the muffins I brought last week.

Not only do I love these people personally, but I’m reminded of what Ephesians tells me about Jesus, whom I respect much more than Rev. Terry: “I pray that you may have your roots and foundation in love, so that you may have the power to understand how broad and long, how high and deep, is Christ’s love.”

Whatever faith or un-faith you are, I hope love comes out on top of fear.

This entry was posted in New York, Something to think about and tagged Christianity, Love. Bookmark the permalink.

14 responses to “Thoughts on Love”